(This is an updated version of a thread I originally posted on GBAtemp in March 2021.)

The current method for dumping a Wii U kiosk system (CAT-I, CAT-SES) requires using a hardmod to dump the eMMC, then using Recovery Mode to install SDK 2.13.01 and dumping the keys. It turns out that, if the kiosk system has a recent enough firmware, it’s possible to dump the eMMC (and SLC, etc) without any hardware modifications.

The Wii U operating system (IOSU) includes a debug logging facility (enabled on devkits only) that logs debug output to two places:

In addition to simply logging debug information, the serial console can be used to run a limited set of commands in the cos shell, as long as the system is in Development (not Production) mode. It turns out that, on recent enough firmware versions, there’s a cos shell command to launch a title, and this can be used to launch System Config Tool.

Devkit models, in case you’re unfamiliar with them: 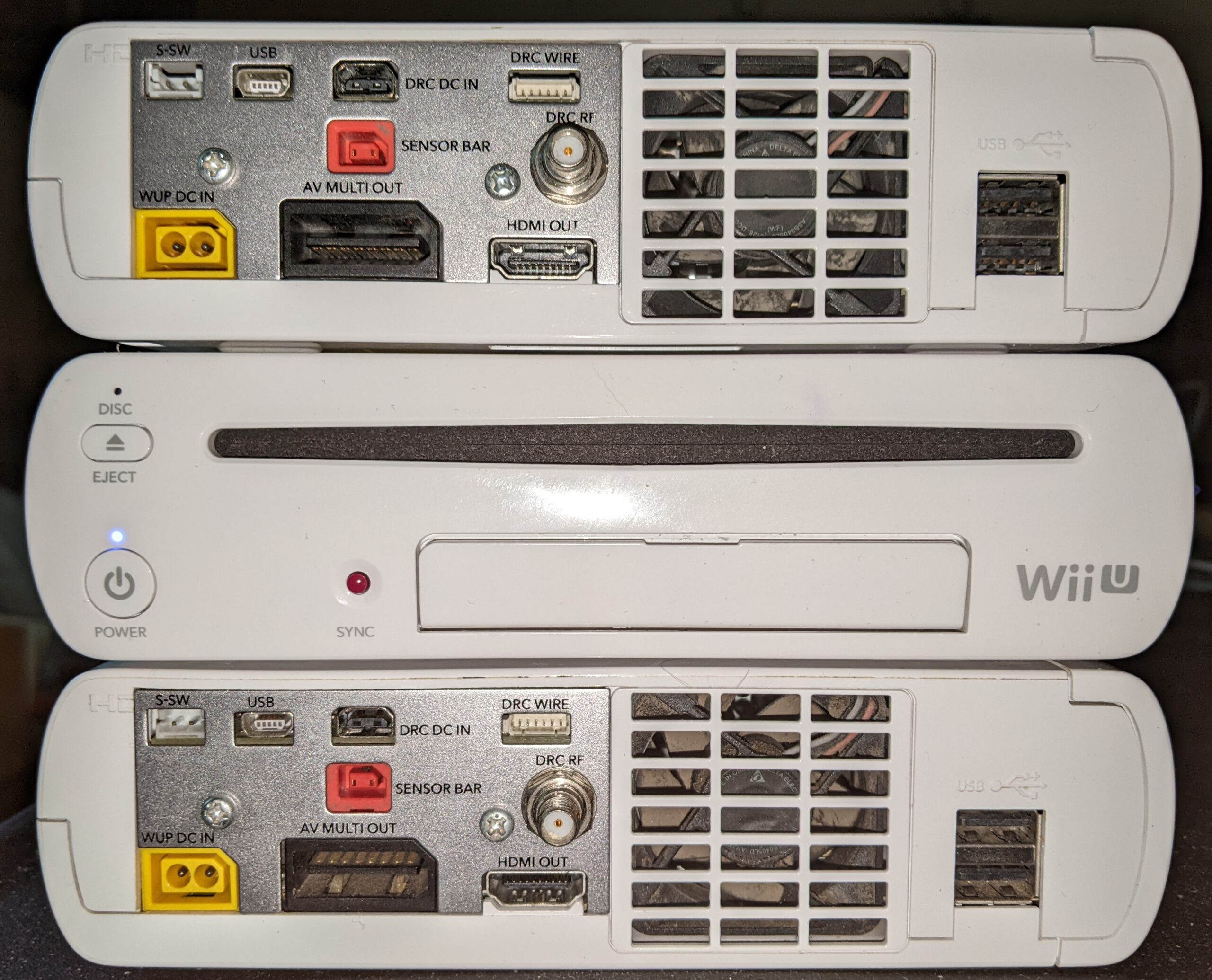 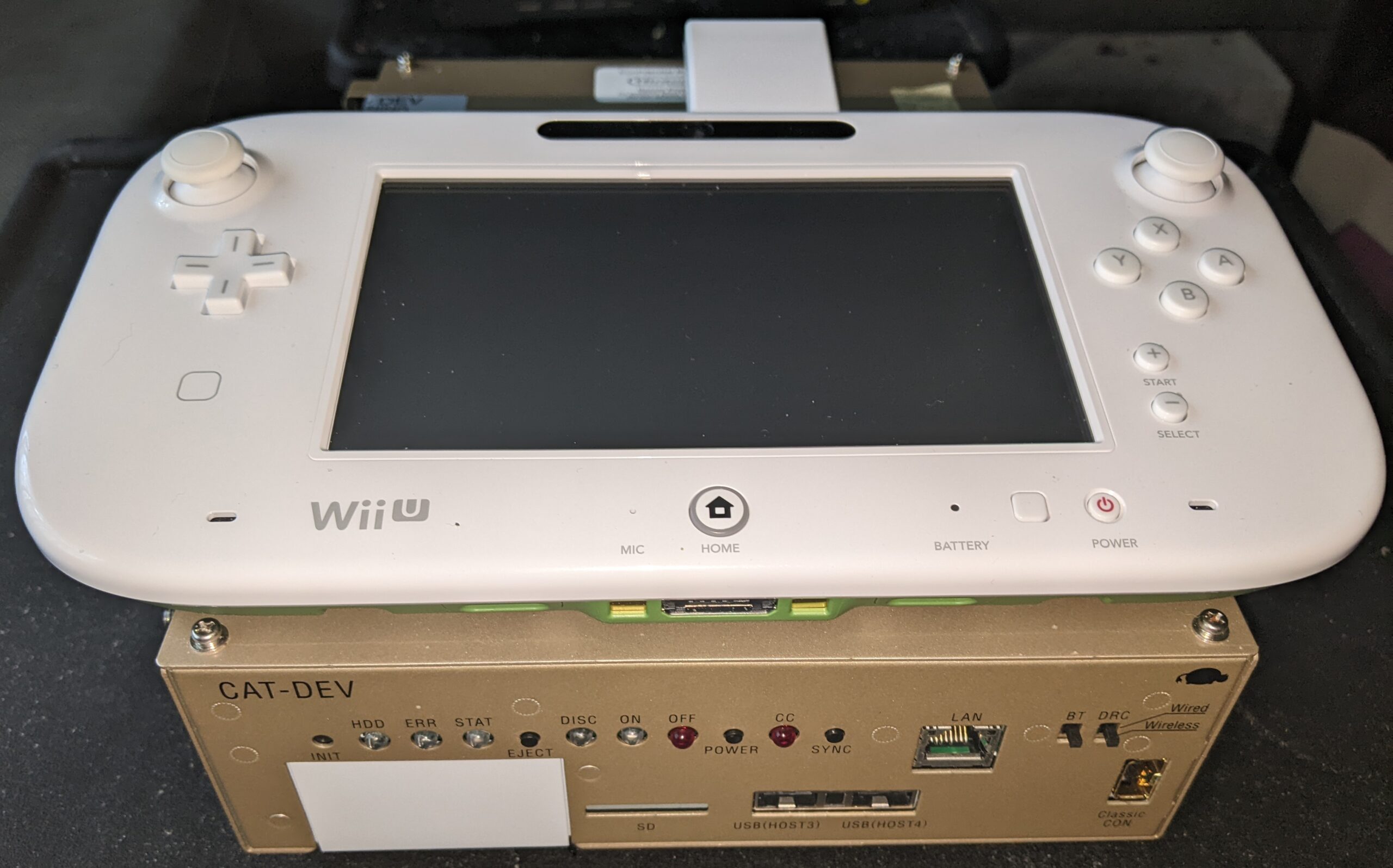 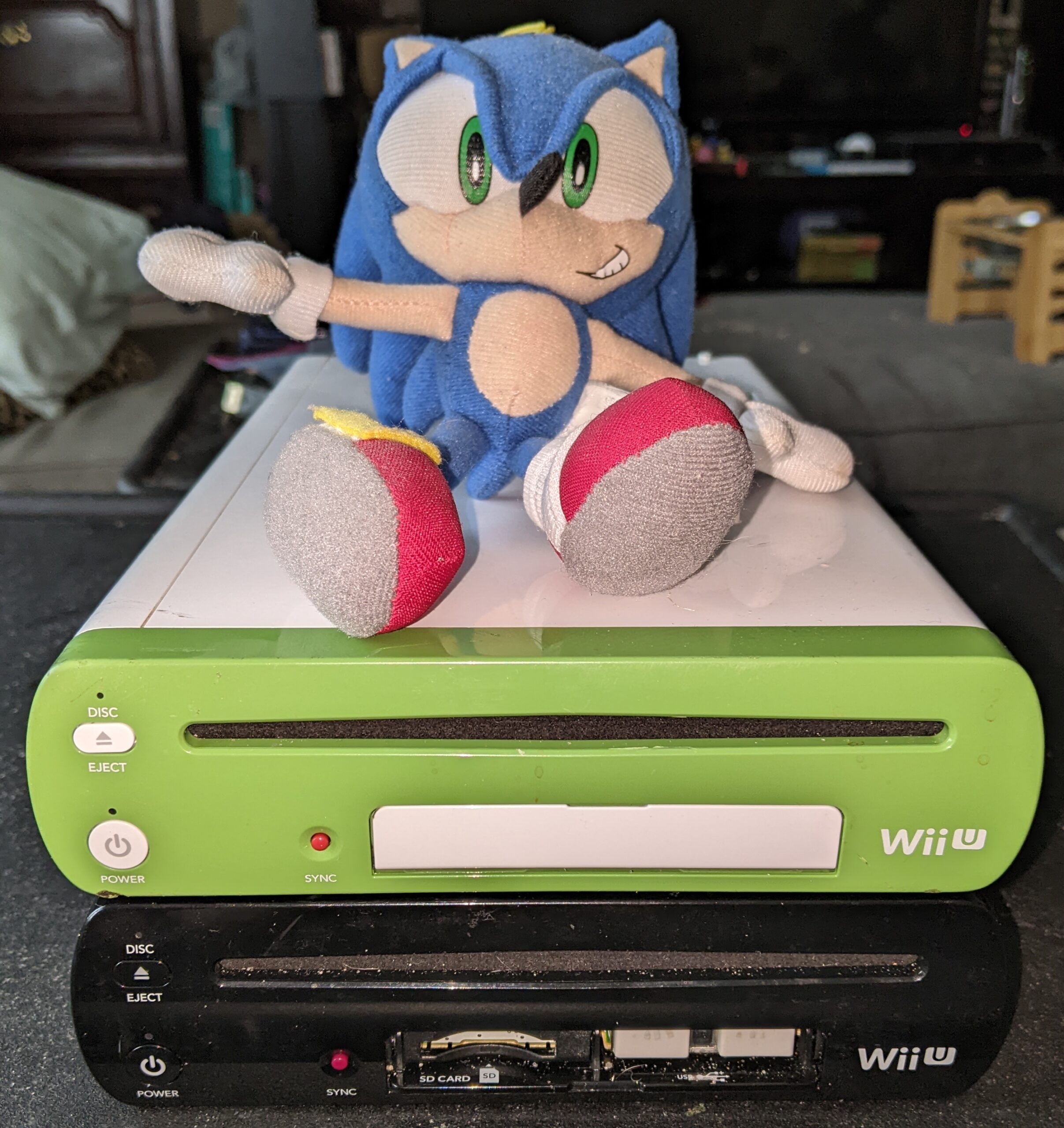 A description of the above systems, from left to right:

This guide is generally not needed for CAT-DEV or CAT-R units, but it should work with them regardless.

You will need the following:

To determine if the cos shell is working, type the following in the serial terminal, then press Enter:

If cos shell is working, and the system is set to Development mode, a message similar to the following will be printed:

In this example, the system has SDK version 2.13.01 installed. This is the latest version of the system software, which corresponds to Wii U menu 5.5.0.

WARNING: If anything other than 21301 is displayed, you must stop here for now. Both the dev-signed Homebrew Launcher and Wii U NAND Dumper only function properly with the latest version of IOSU, indicated as SDK 2.13.01. However, if the system is new enough, e.g. 2.12.12 or 2.12.13, it’s possible to update just the IOSU title to the latest version, but this requires a copy of the development version of IOSU. This is named os_v10_ndebug and may be found in the latest SDK and in newer CAT-I kiosk disc images. If you do in fact have 2.12.12 or 2.12.13 and a copy of os_v10_ndebug, you can continue to the next section.

This will result in one of the following:

If either #1 or #2 happens, you’ll need to stop here for now. You can post in the GBAtemp thread for support questions.

WARNING: This step requires changing the system mode to Production. After this setting is changed, DO NOT RUN ANY KIOSK TITLES. Doing so may result in Kiosk Menu being set as the default title, and cos shell will not accept any commands while in Production Mode. If this happens, and you have SDK 2.13.01 installed, you can use udpih to reset the startup title to System Config Tool.

Set the system to Production Mode:

Run the Wii U NAND Dumper:

Switch Back to Development Mode

After dumping the system’s NAND, put the system back in Development Mode to re-enable commands on the serial port:

Save the NAND dumps in a safe place for later use. You can use wfs-tools to extract files from the MLC dump and NUSPacker to build installable packages. (Note that NUSPacker doesn’t use the original ticket, and may need some adjustments to work properly with dev-signed packages, so it won’t be 100% identical to the original kiosk packages, but it’ll be close enough.)

As an optional step, you can flash SDK 2.13.01 and Wii U Menu Changer. This will wipe the system and effectively turn it into a standard devkit. This requires DDI recovery image files from the official SDK that cannot be linked here and are beyond the scope of this guide.

If you don’t want to wipe the system, you can keep System Config Tool as the startup title, or switch to Wii U Menu. Note that Wii U Menu might not load due to Kiosk Menu making some adjustments to the accounts, so you will need to set the “Launch State” option in Boot Configuration to Stage 0. This will tell Wii U Menu to initialize user accounts. Do note that launching Kiosk Menu will erase the user accounts again, so switching back to Wii U Menu may require setting “Launch State” back to Stage 0 again.

wii u
devkit, kiosk, wii u

3 responses to “Dumping Wii U Kiosk Systems without Hardmods”

This site uses Akismet to reduce spam. Learn how your comment data is processed.